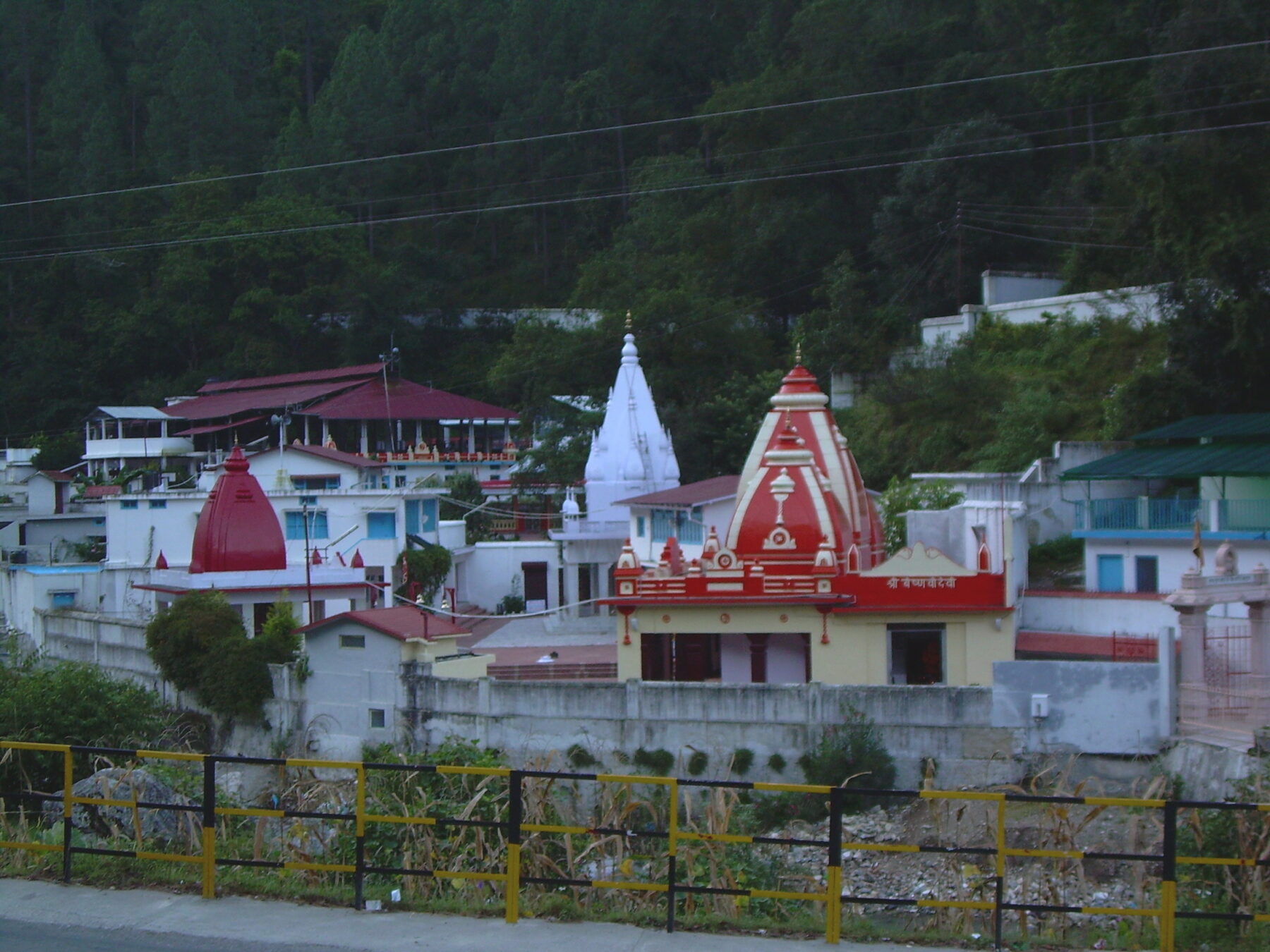 We recently spent 2 weeks in the Kumaun Hills, at the Kainchi ashram of our guru, Neem Karoli Baba. We were there for the 9 day celebration of the goddess, called Durga Puja. There is no way to describe the richness and profundity of those days, so I will just send journal entries from a few of the days.

FYI, a typical day there during the puja:

5 am – Wake up to “Hare Krishna” wailing through Kainchi valley over the loudspeakers from the ashram. Then heat buckets of water with our electric coil for bathing.

6 am – Chai is brought to our door by Girish, the owner of the new guest house where we are staying, directly across the street from the ashram.

Then arati at the ashram — lights are waved and songs are sung at each of the 6 temples within the ashram.

Chai and breakfast of puris and potatoes, channa (dry, spiced chick peas), served on fresh teak leaves from the nearby teak forest.

After breakfast the puja begins–the pandits begin chanting the mantras, and doing all the rituals.

After dinner, the Indian ladies sang traditional songs (we didn’t attend, but could hear over the loudspeakers)

As I understand it, Durga Puja celebrates the part of the story of the Ramayana where Ram invokes the aid of the goddess Durga in overcoming the armies of the demon king Ravana, in order to free Ram’s wife, Sita, from Ravana’s capture.

The yajna (ritual) fire was lit today, the fourth day of Durga Puja. The fire has to be started by hand–no matches allowed! The men in the yajna shala (open construction with a fire pit) take turns trying to get it going. Some years, I’m told, it has taken over an hour to light. But this time, the second man to try got the fire started.

One piece of wood lays on the ground, then another piece with a pointed tip, around which a rope is wound, is placed perpendicular on the first piece. One man holds the standing piece of wood in place using a swiveling handle that has been inserted into the top. Another man pulls briskly back and forth on the two ends of the rope, as everyone sings “Jaya Ma.” Eventually the friction between the 2 pieces starts a spark, and a tiny ember is created. This is placed in a large metal container that is filled with coconut husks. A thick smoke billows forth as the husks slowly catch fire. The smoldering husks are then placed in the fire pit, firewood is placed over them, and the fire begins to burn brightly.

Watching this process gave me a profound thrill. All the mantras that were chanted throughout created a powerful vibration and a very focused environment. As the fire began, there was the feeling that the Devi (goddess) had suddenly manifested before us, and the increasing flames brought her life force more and more fully into presence.

Eight little girls from the village, and one boy, are honored as the kumari (goddess). I’ll have to read up on this tradition to understand why it is done, but in any case, these little girls are absolutely adorable! They get dressed up in their finest, and are seated at the front of a room, where everyone crowds in around them, singing songs to the goddess. Their feet are washed, tilaks applied to their foreheads, and various other ritual offerings are made.

Several of the Indian women sang Durga Puja songs (which are very lively) and then they jumped up and began to dance their traditional village dances. So beautiful! They began to pull women out of the audience to join them, and I was one of those. I made my humble attempt to mimic some of their gestures, and of course it was all in good fun.

Then the arati lights were waved to the children, followed by a procession of (us) folks who had brought little gifts to offer to the tiny goddesses. We gave them colored pencil sets, which was apparently a “good gift,” according to the little girls who live upstairs from us.

Just an aside here: speaking of the little girls who live upstairs, the oldest, Anjali, came into our room one day when she heard me singing with a harmonium I had borrowed. She asked if I knew any Durga Puja songs, which of course I didn’t. So she proceeded to sing one for me! It was quite a long, lilting song, which she sang beautifully with all the attendant head and hand gestures. Her voice was angelic and strong, and I really felt I had been blessed with Devi darshan!

Durga Puja ends today. There is a feeling of ecstasy in the air–there is great shakti, and a profound sense of clarity as the last mantras are being chanted. A bandhara was held earlier today, and everyone from the surrounding villages thronged the ashram to offer prayers and partake of prasad.

The 9 kirtan wallahs, who have sung at the temple day and night throughout Durga Puja, give their grand finale and are honored on the day after the puja ends. They are amazing musicians and showmen. Beginning at 5 am each day, they begin chanting “Hare Krishna,” which rings through the valley on loudspeakers. Variations of the same chant are kept going until 9 or 10 pm, even when the loudspeakers are turned off of them in favor of the mantras being chanted by the pandits in the puja.

On this day the musicians led us all from temple to temple within the ashram, singing, dancing, tossing baskets and baskets of flower petals, and placing flower garlands around our necks. We ended up in a garden area behind one of the rooms where Maharajji (Neem Karoli Baba) used to stay, and now the real show begins. They led us in song after song that the Indians are clearly very familiar with. They dance and sing with abandon, in a state of spiritual intoxication.

At one point, the door to Maharajji’s room is opened, and we are allowed to file through for an intimate darshan of his private dwelling. When the show finally ends, the kirtan wallahs pack up and ship out, leaving the rest of us dazzled, and in an altered state.

On the day we are to leave, a 24-hour period of chanting “Sita Ram” begins, and we are given our final, private, darshan (audience) with Siddhi Ma. Over the days spent here we have not only enjoyed to hear many of the devotees’ personal experiences with Maharajji, but also many beautiful and miraculous stories of Siddhi Ma. As we enter her room, we are ushered through to the back to a garden outside, where she sits, glowing radiantly in the sunshine. I am suddenly overcome with emotion, my heart overflows with love, and my eyes flow with tears. I can barely speak throughout our time together, I am crying so. She takes my hands in hers and strokes them, smiling and speaking to me like a mother to a small child. She sends us again into Maharajji’s room for a final darshan, then she fills our arms with various gifts and prasad, and after a few goodbyes, we are on our way.

Our next stop is Jageshwar, with a short pause along the way to take in an incredible Hanuman temple at Kakrighat. Then a few more hours winding through the mountains as we make our way through breathtaking scenery toward the ancient temple village.

The whole way there, we are elated and somewhat dazed as we contemplate our time at Kainchi–the beauty of the valley and the ashram; the mountain people, who are the salt of the earth; the time spent with old and new friends, reminiscing about “the old days;” the unending flow of chai and food and sweets, the ongoing mantras from the puja piercing the atmosphere with their sound and vibration, and the palpable presence of Siddhi Ma, serenely watching over, and lovingly tending to the affairs of the ashram and devotees.

We are filled beyond full, so utterly happy and grateful. These last days have seemingly unwound any remaining knots of tension that were left after our month sitting by the Ganga. We are swimming in joy, and our lives have certainly been changed.

We have now returned from 3 days in Jageshwar, and have been chilling out in Nainital for a few days. We leave tonight on the train to Mathura, where we’ll get a motor rickshaw to Brindavan. I’ll write about our time in Jageshwar in a few days, when we’ve settled in at the ashram in Brindavan.

Meanwhile, we send our love.