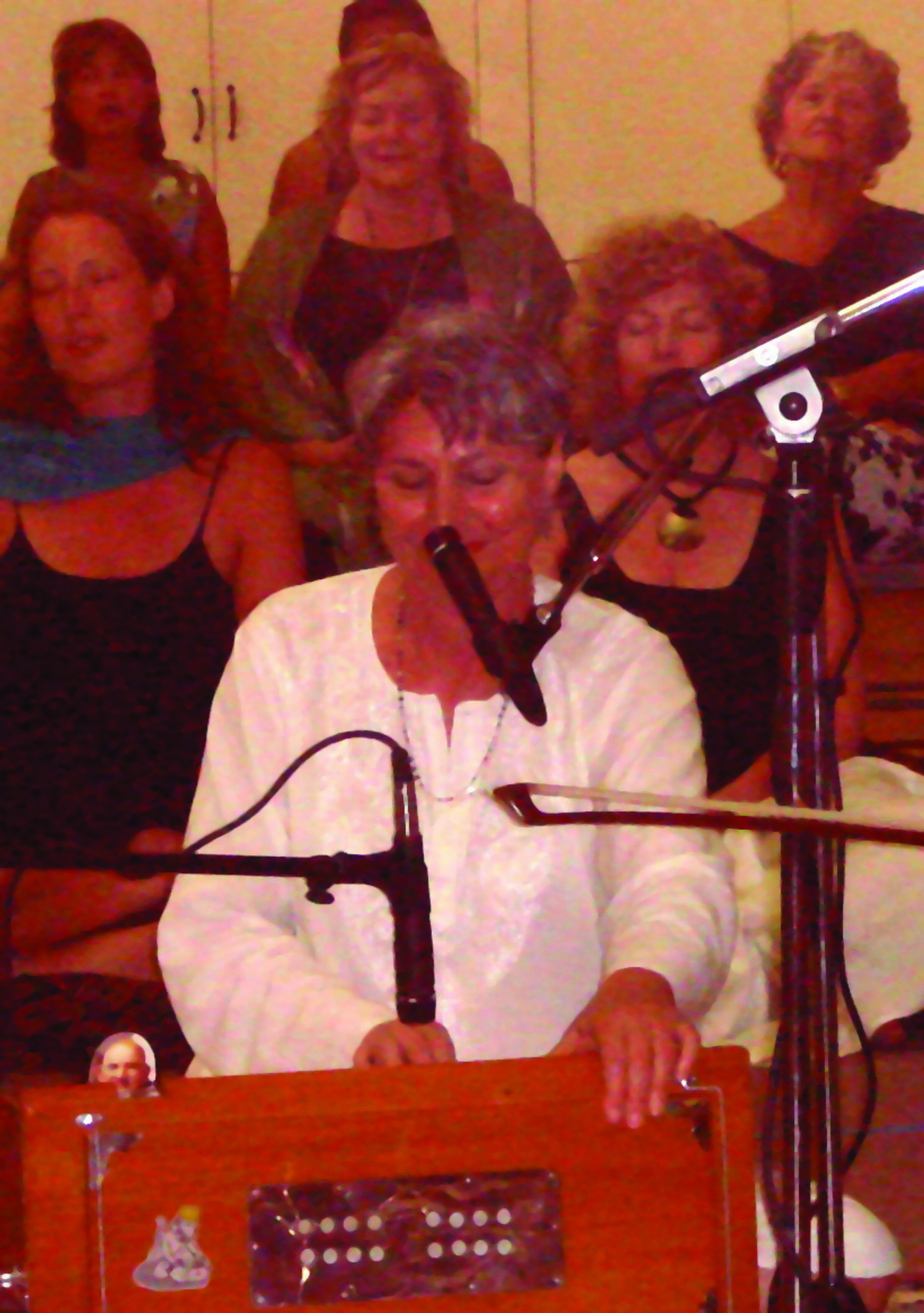 Shivaya and I have just returned from 10 spectacular days on Maui, where we did lots of kirtan, and participated in several satsangs with Ram Dass. I have to agree with the previous reports from friends who visited with Ram Dass: he looks and feels better than ever. He is vibrantly healthy, happy, and at peace, and is being looked after by a wonderful and caring crew of helpers. He goes to the ocean for a swim every week, has physical therapy twice a week, and swims in the pool almost every day. Although he still uses his wheelchair, he is able to walk with a cane, and enjoys climbing stairs and getting in and out of the pool on his own.

Ram Dass lives in a bright and beautiful, spacious home with ocean views, surrounded by lush tropical flowers, fruits, and foliage. From there he is able to offer monthly online satsangs through his interactive website, www.ramdass.org, so he can remain at home and still maintain contact with the worldwide community of devotees. Shivaya joined him for his May satsang, in which they spoke about what it was like to be with Neem Karoli Baba. The camera was then turned on me for a little kirtan. Hopefully people were singing along at home!

We joined Ram Dass again a few days later for his regular Maui satsang at the beautiful Studio Maui yoga studio. Our old friend, Raj Agni (aka Steve Schorr), played tabla with me for the hour-long kirtan before the satsang began. Maui locals Heather Parsons and Ashana accompanied us on guitar and cello, and blended lilting harmonies with the vocals, for a deeply beautiful kirtan experience. Shivaya and Ram Dass then regaled us once more with their tales of life around Neem Karoli Baba.

Heather graciously invited me to lead kirtan at her weekly gathering in her home the next evening, which I happily accepted. We had a rousing evening of singing, drumming, and poetry with the beautiful community of Maui bhaktas!

I spent many hours during the week, sitting on the deck at Ram Dass’s house, singing with my harmonium while looking out at the expanse of ocean, surrounded by a profusion of flowering plants, accompanied by several varieties of singing birds, and graced by the presence of two beautiful white murtis in the back yard—a praying Hanuman, and a reclining Ganesh.

We were given a fabulous tour by one longtime resident who identified flora and fauna, and recited Maui history and lore, as we hiked to hidden fresh-water pools fed by gentle waterfalls. We snorkeled in pools of colorful fish, swam in the ocean, sunbathed on golden beaches. We were guided through dense tropical vegetation to a mountaintop clearing, where a stunning Tibetan Buddhist stupa stood. Flanked by mountains, ocean, and a lovely meditation garden, this stupa was built in the 1970s and was consecrated by His Holiness the Karmapa on a visit to the island.

We visited with old friends who have moved to Maui, and everywhere we went, we ate mangoes, papayas, bananas, and coconuts picked right from the tree. Each evening we ate delicious vegan meals on the veranda with Ram Dass and friends, lovingly prepared by a beautiful young cook who lives nearby. After dinner we waxed philosophically, then watched movies, or sang kirtan, and jumped in the hot tub for a soak before going to bed.

As always, Ram Dass was a most gracious and generous host, and our trip was nothing short of fabulous. I was struck by his tireless generosity of spirit, the openness with which he greeted everyone who approached him, and the sincere interest and attention he gave to each conversation he had. He is definitely “in his element” on Maui, both physically, and “heartfully.” The spirit of Neem Karoli Baba shines brightly in him and is passed on to everyone he meets.

We will definitely be returning to Maui, doing more kirtan and workshops there, and taking in the aloha spirit. If you have any interest in traveling to Maui to join me for a kirtan retreat sometime in the next year, please drop me a line!

Meanwhile, we hope to see you at Open Secret on June 14th, for more stories about Maui and lots of kirtan!